To Rescue or Not to Rescue 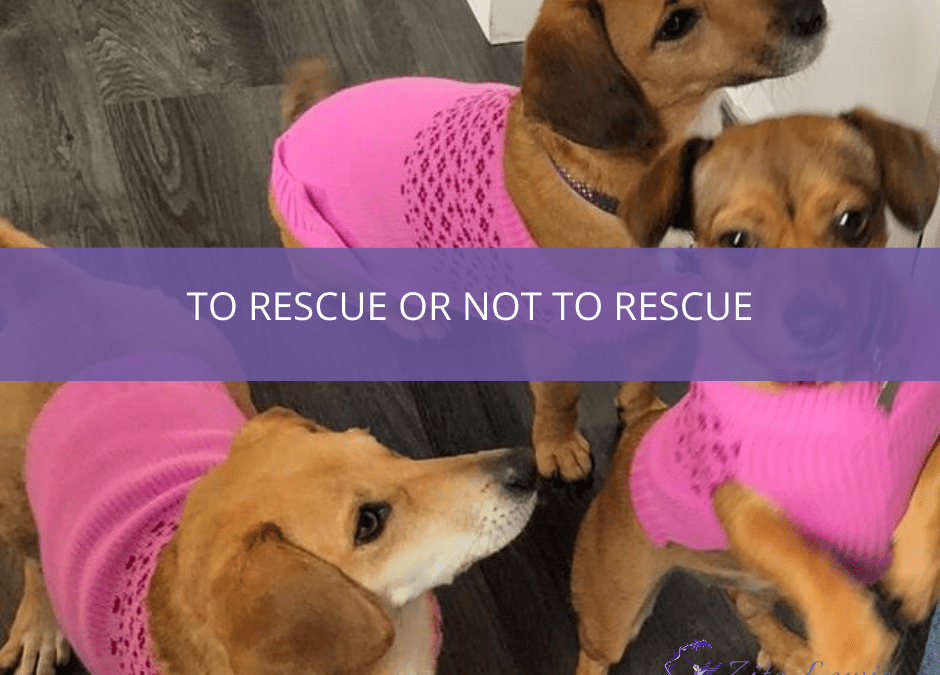 Back in 2015, we decided as a family to look at adopting a rescue dog.  We’d never had any experience of dog ownership.  My mum was never keen on dogs despite my father having them growing up and my husband’s family had cats.  Luckily, I knew someone who did a lot of work and fostered for an amazing charity in Wales called Many Tears and she offered to keep an eye out.  She knew we wanted a dog fairly easy-going, to fit in with the family.

She was on holiday in Wales back in August 2015 when she spotted a dog that she thought would suit our family.  She offered to go and take a look and see if she was suitable.  Well, as they say, the rest is history.  Ruby (or Julie as she was originally) joined us in August 2015, she’d been well cared for by Steph, her foster mummy.  She took to toileting outside pretty much straight away and she is the most loveable, loyal and lazy dog, she’s broken us in gently.  She is scared of a lot although she is improving all the time, thunder, loud bangs, traffic all those things still spook her.  She is most definitely my dog; I struggle to even go to the loo by myself.  Just like having a third (well maybe fourth) child.  But I wouldn’t have her any other way.

We’ve learned some lessons from having her too.  Get a harness as they can easily slip their collars and run home.  That’s only happened three times.  Now she has a harness but even that isn’t foolproof.  She used to sleep downstairs, then slowly she was let upstairs for morning cuddles which then turned into sleeping upstairs with us full-time.  That’s fine when you’ve one dog but if you’re planning on more, think ahead.  She loved her crate, felt secure and safe in it, still loves it when we’re in the car.  Oh, and if you don’t like dog hair everywhere, make sure you research breeds that don’t shed so much.

In December 2017 we thought about whether Ruby might like a playmate.  To be honest we were torn.  They are of course supposed to be pack animals but Ruby didn’t seem too fussed with other dogs.  Only the ones she stayed with if we ever went away.  Otherwise, she could take them or leave them.  Then the same friend who found us Ruby sent me a picture.

Of Lola (was Tasha), a very underweight, dachshund cross from Romania.  Patricia Ann Kelly was fostering her so we all popped along to see her.  I must admit I was worried about how Ruby would take her.  They do have their spats.  Lola is very much top dog as Ruby is just too lazy to assert her authority.  They’re been times we’ve had to separate them, then 10 minutes later they’ll be snuggled up together. Lola has some health issues; she’s got some very turned out front legs which will cause her problems in later life but she is a character none the less.  She’s my husbands’ dog, follows him everywhere and pines when he’s upstairs.

So, family complete, hmm afraid not, fast forward to August last year, when the lovely Mimi came into our life’s.  She was 9 months old and she has bought such fun to our household.  Her and Lola love to chase each other and play statues.  Ruby tries to join in sometimes but Lola doesn’t always let her so I have to play with her instead.  Mimi being such a small dog can get away with murder.  She’s the only one who can get onto the chairs at dinner time and nudge her nose under your arm for scraps.  It’s hard to believe she’s been with us almost a year already.

I won’t say it’s not hard work, 2 children, 3 dogs, a millipede and a snake. They all take work and time and effort.  However, when you are snuggled on the sofa of an evening with three beautiful rescues on your laps, safe and contented and snoring away, you know it’s worth it all.  They give so much love, considering most have been so mistreated by humans, it makes you wonder how they can ever trust again, but they do, unconditionally.  Our family wouldn’t be without any of them.

This website uses cookies to improve your experience while you navigate through the website. Out of these, the cookies that are categorized as necessary are stored on your browser as they are essential for the working of basic functionalities of the website. We also use third-party cookies that help us analyze and understand how you use this website. These cookies will be stored in your browser only with your consent. You also have the option to opt-out of these cookies. But opting out of some of these cookies may affect your browsing experience.
Necessary Always Enabled
Necessary cookies are absolutely essential for the website to function properly. This category only includes cookies that ensures basic functionalities and security features of the website. These cookies do not store any personal information.
Non-necessary
Any cookies that may not be particularly necessary for the website to function and is used specifically to collect user personal data via analytics, ads, other embedded contents are termed as non-necessary cookies. It is mandatory to procure user consent prior to running these cookies on your website.
SAVE & ACCEPT